Reconfigurability has many advantages, as users of the swiss army knife have known for many years.  Many different functions can be packaged in a small form, providing a lightweight and portable tool for a variety of situations.  Our hope is that we can bring the advantages of reconfigurability to a Unmanned Aerial Vehicle.  RECU is an offline reconfigurable UAV, which can take up the following two distinct configurations: (i) a fixed wing UAV and (ii) a quadrotor UAV.  Both configurations are comprised of a set of modules, most of which are shared between the two configurations. 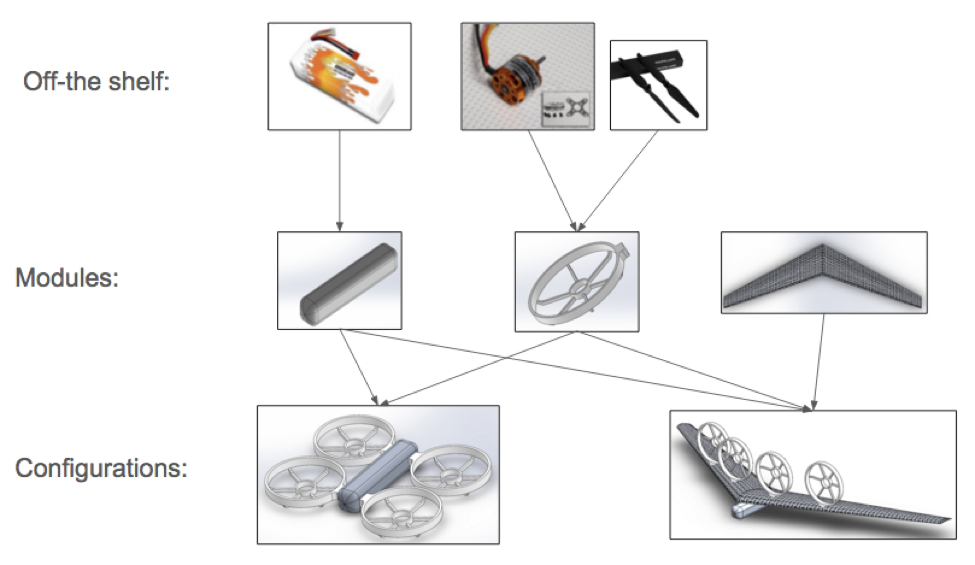 Hybrid UAV systems such as RECU fill a unique niche in the Civilian UAV market for applications that require both hover and subsonic forward flight (under different scenarios).  For instance, in emergency response situations it may not be possible to deploy the UAV on site, and it may have to travel long distances deemed impractical for rotorcraft.  At other times, the hover ability is required for steady surveillance of a general location (to aid search and rescue).  RECU could be used in both scenarios, and would thus provide rescue workers with a single, flexible tool, ready for whatever obstacle the situation presents. In addition, damaged modules could be repaired or replaced independently, reducing maintenance time and costs.

The immediate goals of RECU are twofold.  The first objective is to design a set of modules which provide optimal performance of both configurations.  The second is to develop a framework in MATLAB and other softwares to aid further research in the area of reconfigurable UAV design.  Future goals involve creating a robust interface for the modules and prototyping the optimal design.

The first and second goals, designing a UAV and building a framework, are being undertaken concurrently: the framework is the tool through which the design is completed, and the design process informs the features and utilities that should be included in the framework.

The framework was designed with the following goals in mind:

As for the design itself; the goal is to simultaneously maximize the endurance of both the fixed wing and quadrotor configurations. Each module (fuselage, wing, and rotor) has a number of design variables, both geometric and discrete.  For instance, the fuselage module includes a geometric variable, “length”, and a discrete variable, “battery” (which is selected from a list of candidates); the wing module has a large number of geometric variables for span, taper ratio, etc, as well as a discrete variable for airfoil type.  The variable values from all modules which produce the best design are determined using a multiobjective genetic algorithm.  A video of iterations within the GA are shown below.

The objectives used to determine what design is “best” are the endurances (maximum flight time) of the two configurations.  Endurance is a performance measure that is affected by motor, battery and wing efficiencies, and mass, and is as such is a holistic measure of UAV performance.

Early results show that the coupling between the performance of the quadrotor and the fixed wing is weak, but this may only be because of large jumps in the performance of the batteries and other discrete variables.  The quadrotor performance is dominated by battery, propeller, and motor selection, all of which are discrete variables, and thus shows quantized endurance.  The fixed-wing configuration’s performance depends more strongly on the geometric variables that determine wing efficiency, which are continuous.  The effects can be seen in the graph below, which shows the endurances for the configurations on the x and y axes for all feasible solutions found by the genetic algorithm. 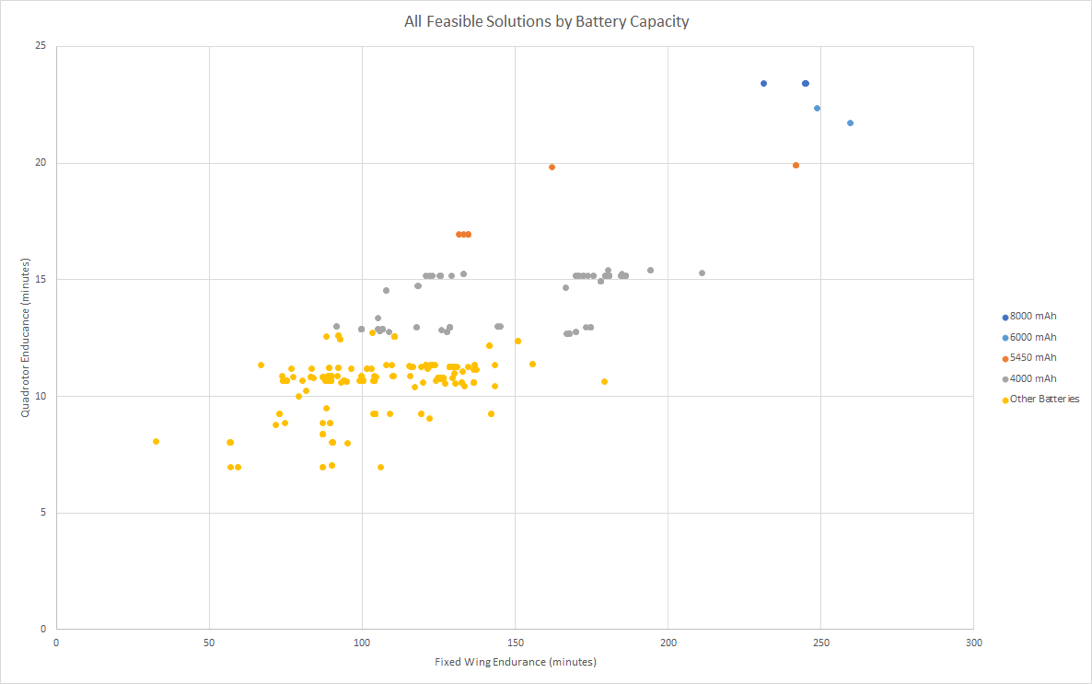 There was hardly a tradeoff between the best two designs, which are shown below.  The major difference was a larger battery in the second design, which gave the quadrotor a slightly higher endurance and the fixed-wing a slightly lower endurance (~10% change for each).

Current work aims to improve the usability of the framework and to include stability considerations for the fixed-wing configuration.   There is much room for further work in this area.  One potential extension is to determine the minimal set of modules that can capture the greatest amount of mission space.  For instance, one may ask, “can the addition of a second fuselage module (to be assembled in place of the current module) improve the performance of the fixed-wing or quadrotor endurance?”  If so, how should the first module be redesigned to provide the widest range of capabilities?  Similar examinations can be done for all the modules, and a trade-off found between total weight of all modules and total mission capabilities.